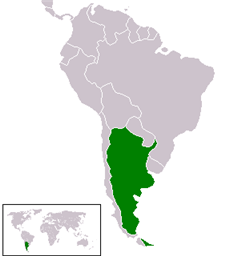 Argentina is a South American sovereign country constituted as a federal representative republic. It is divided into twenty-three provinces and an autonomous city: Buenos Aires which is both the capital and the seat of federal government. Its population is around 40 million inhabitants.

It is second in size on the South American continent, fourth on the American continent and eighth in the world. Its continental surface, which covers a great part of the Southern Cone, is bordered by Bolivia and Paraguay in the north, Brazil in the northeast, Chile in the southwest and Uruguay and the Atlantic Ocean in the east.

The vast Argentine territory has a diversity of landscapes, where ice fields contrast with arid zones; mountains with valleys or plateaus; fluvial streams and lakes with large oceans, broad grassy plains with woods and forests.


Warning: count(): Parameter must be an array or an object that implements Countable in /homepages/24/d236200545/htdocs/agiles/scrumgathering2012/wp-includes/class-wp-comment-query.php on line 399